What’s Your Why: Woody Harrell

Woody Harrell has waited for a half-century to run a marathon in his hometown!

It has been almost 47 years since he last ran a road race in Elizabeth City, but Woody Harrell has fond memories of the 1975 ten-mile Pasquotank River Run. “Wristwatch prizes to the top ten places attracted a really strong field, including more than a half dozen athletes who had run a marathon in under two hours, thirty minutes,” Harrell recalls. “Olympian Jack Bacheler won in the excellent time of 50:46, edging Eddie Hereford by just eleven seconds. Of the 28 finishers, 15 of us were able to cross the line in under six minutes per mile pace.” 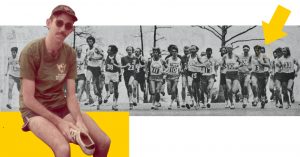 This photo shows him (barely) on the second row at start of the March 1975 Pasquotank River Run 10-miler. At 6’ 7”, Olympian Jack Bacheler (Florida Track Club jersey) towered over the field on his way to an impressive win.

Harrell found his best race distance to be the marathon (PR – 2:36:27), competing in several Boston and AAU Championship events, but always wished he could have raced the 26.2-mile distance in his hometown. Now, with the inaugural Coast Guard Marathon coming in March 2022, the Elizabeth City native will finally have his chance. “I was so excited to hear about this new race, especially with the course going right by my birthplace, the site of the old Albemarle Hospital! Early Spring in Pasquotank County is a great time to run, and what could be prettier than running along the river!”

Woody Harrell displays his most recent Boston Marathon medal in front of a photo of his first Boston in 1973.

Harrell admits when you have trained for 50 years for a particular race, there is a good chance you may have peaked too soon. “With COVID restrictions and several nagging injuries, my last two years of running have been tough. However, right now I’m training much better than I was for last year’s Virtual Coast Guard Half Marathon. At age 74, my main goal will be to just finish, hopefully within twice the time of my ancient personal marathon best.” Harrell says taking part in the Coast Guard’s first official foot race will be extra special. This was due to his affinity for the old U.S. Lifesaving Service, the precursor of today’s modern Coast Guard. “While working at Cape Hatteras National Seashore back in the 1970s, I was able to take part in re-enactments of the USLSS’s early 1900s Beach Apparatus Drill, also known as the Breeches Buoy drill. Until the onset of helicopter rescue by the Coast Guard in the 1950s, the Beach Apparatus was the preferred method of shipwreck rescue employed by crews along the Outer Banks. This method was much safer than launching surfboats into violent, storm-tossed seas. That ‘living history’ experience gave me a deep appreciation for heroic work done by the Coast Guard every day.” 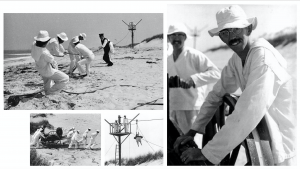 After his training and waiting for a half-century, we look forward to welcoming Woody Harrell back to his hometown of Elizabeth City, NC to finally cross the finish line of the inaugural Coast Guard Marathon! A special thank you to Harrell for sharing his story with all of us! If you have a story to share, please fill out our What’s Your Why form, too!